British actress, best remembered for films such as Genevieve, Les Girls, Once More, With Feeling! and The Reluctant Debutante.

"I had always wanted to be a ballet dancer, but I grew too tall. When I got up on my toes, I was 10 feet 6 and my feet collapsed."
This is an exaggaration. She is actually 5 feet 9, a statuesque height that doesn't seem to have handicapped her career. "It did at first, I had a aterrible time getting parts. But women are much taller these days; Maggie Leighton is 6 feet 1 ½ If I encounter a leading man who is shorter than I am, I wear flat shoes and he wears lifts."
- 1957 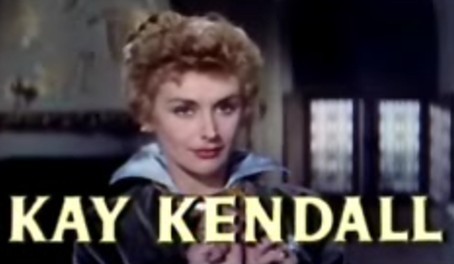 Here's Kay next to her husband 6' Rex Harrison: Click Here And no, Harrison wasn't 6'1" as he claimed. He was an inch shorter than 6'1" Martin Landau in Cleopatra. He had to wear lifts when he appeared with Heston in The Agony and the Ecstasy. He even admitted it in his autobiography.

And finally, Kay actually did an episode of the old TV series Sergeant Bilko with Phil Silvers. In it she was more than just an inch shorter than 5'10 Silvers. I'd say she was closer to 5'7-1/2".