American actress best known for roles in films such as Charlie's Angels, Kill Bill, Lucky Number Slevin and Cypher. On television she is well known for playing Ling Woo in TV series Ally McBeal and Joan Watson in the crime-drama series Elementary. 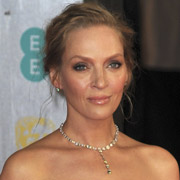 She's blonde now, and it suits her. 👱‍♀️ Lucy is very adamant that she's 5ft3, but I didn't pick up on that fact when I used to watch Ally McBeal, and thought that Calista Flockhart was taller than her 5ft5.5.

I wonder whether there's some truth in her being so adamant that she is 5ft3, so for that reason I shall up her a little to 5ft1.5.

Junior Hernandez said on 4/Feb/18
Shes 5'0.5" at best.
Animus said on 8/Dec/17
She is quite like Aaron Eckhart or Matthew McConaughey claiming 6'0. You would have to be clueless about your actual height for it to make sense to claim a height so different from your own. With heels she can better convince people of her being 5'3 than the two gentlemen can convince anybody they are 6'0.
Subzero said on 10/Oct/17
She's definitely 5 ft. 5ft and a half at most. Very short lady.
Mental Wizard 6'2 said on 4/Aug/17
Claims to be 5'3.
Looks way shorter than that. She's about 5' and a half
Heightist said on 4/May/17
I'm 5'3", also Chinese American, with a similar build. She definitely looks shorter than me! I've always thought she was around 5'1" or 5'2". Her height is common for Asian women.
Sandy Cowell said on 28/Mar/17
I also thought she was 5ft1, at the very most! I don't see Lucy at 5ft3 - ever!
S.J.H said on 20/Jan/17
Bill murray is a solid 6'1 and lucy liu discribe him as being 6'4 and say shes 5'3 lol i wouldn't think shes over 5'0.25 from now on.

Editor Rob: it's about 5ft 1.8, so you can call both 5ft 1.75 and 5ft 2 about 157cm.
LoganNoll1996 said on 27/Jul/15
Is it possible she's a flat 5'1? Or maybe even a flat 5'0? After looking at new images I can't see 5'1.75 being possible.
MyownPrivateLiu said on 17/Apr/15
My Chinese lady is 178cm without shoes and is smoking hot. I would never trade that for short legs.
shoz said on 12/Apr/15
Have you noticed that during Elementary, while doing any scene without high heels on (just out of bed etc) she is very quick to take a seated position to disguise her lack of height, she is obviously very self conscious about being a short person.
C said on 22/Dec/14
Just looking at random pictures, and saw this...I didn't realize how short Lui was...so I thought I'd post it here - Dwarfed, eye to shoulder, by 5'8" & 5'9" Taylor Schilling, Maggiee Gyllenhaal, and Mira Sorvino: Click Here
Norma26 said on 22/Sep/14
Drew Barrymore looks 2 inches taller than Lucy Liu in this pic Click Here
Conner said on 9/May/14
I'm honesty shocked by some of the comments on this board. Who ever said it was bad to be a short female? Some of you act like it's a negative against anyone who is small and it sounds pretty offensive. Would you speak the same way about a dark skinned person or someone with slanted eyes? How is someone's height any different? They were born this way...besides petite females are WAY hotter than tall ones anyway.
gemsan said on 1/Apr/14
As fine as she is, who really cares how tall she is? She looks just great to me.
DP said on 26/Jan/14
Lucy Lui must be 5'1 maybe 2. When i see her Elementary Season 1 and Season 2 she ALWAYS wears platform, high heeled shoes or boots. Very clear indicator of someone how is pretty short and even more show next to her co-star. In order to disguise this fact, even when an episode was filmed in snowy NY, there she walking down the street wearing the most unlikely shoes you could think of wearing in sonow....mega high heel boots. DEFINATELY a shorty.
sherlock girl said on 8/Jan/14
Hey Rob what do you think her weight (for 5ft3) is in elementary? Awesome serie by the way!
Logan Noll 1996 said on 12/Oct/13
@Liu fan

Heightgirl said on 4/Sep/13
Lucy can not be 5f3 and she actually looks less than 5f1 to me. Maybe 5'0.75 or even less than that? She was photographed next to 5f1 Nicole Richie wearing platform high heeled wedges and only looked to be the same height even though Lucy had the shoe advantage. Click Here Marisa Tomei is said to be really only 5f2 and after seeing this pic I would have to agree with that. Looks like most Celebs actually do add an inch or two to their real heights imo.
Jack said on 14/Jun/13
I would have guessed closer to 5'5"
DigitalAssassin said on 20/May/13
I always thought she was taller. However after watching the season finale of Elementary and reading this site; I did notice she wore quite tall heels. Thanks for the information.
logan noll 1996 said on 11/Mar/13
If you look at her next to Johnny Lee Miller, you can obviously tell she's over 5 foot. Anything 5 foot or below is obviously crap.
logan noll 1996 said on 17/Feb/13
Teeny, that's crap. She is not THAT short. She taller than 5'1. You must've been wearing some HIGH heels that day.
teeny said on 16/Feb/13
I don't see how she can be 5'3. I am truly only 5 feet tall. I was standing next to her and I was looking down at her. I was like "wow, she's not even 5'"
jeff_eng said on 24/Dec/12
5'2" or shorter. Met her at union square wearing sneakers.
logan noll 1996 said on 28/Oct/12
She sounds a little serious about her height whenever I read the quote. Like I said, admire and respect her too much to go against her. I'll eave it to all of you guys to determine her height.
logan noll 1996 said on 25/Sep/12
Most beautiful woman as well as the kindest and most talented in the world. I admire her too much to go against her claim though she does seem to fit in the 5'2 range in my mind.
Attila_194cm. said on 19/Jan/12
I think she is almost 159.
Silent d said on 17/Jan/12
She looked 5 foot 2 next to craig ferguson in 5 inch heels. 5 foot 2 is about right. In southland next to her partner. She looks really short. 5 foot 2 is about right, She's asian and pretty. I'm asian too so i know.
emil said on 9/Jan/12
logan noll 1996 says on 6/Dec/11

Lol.
Unless you won't reach puberty before 16 there's no way in hell you'll ever reach 6'4 Lololololololololol

Doesn't look more then 5'1 here. Makes Cameron look like a giant. And she is in high heels it looks like.

Again, doesn't look more then 5'1 when you factor in that she is in high heels. Makes Owen Wilson look like a giant.

Looks to be in heels and still 8 inches shorter then Gil Bellows who you have listed as 5'10.

Looks 5'1 next to 5'5 (maybe less) Christina Applegate, too bad you can't see the shoes.

MOre then a foot shorter then 6'3 (possibly less) Josh Harnett.

Next to Ben Kingsley, looks 5'1 and is most likely in heels.

I think this is enough to proof that she is at best 5'1 and a half. Probably more like 5'1.

ted said on 11/Nov/06
I saw a picture of Lucy Liu wearing high heels. What heght would this make her?
Leah said on 23/Oct/06
I think people came off saying she was 5'1" because asians tend to be shorter.
I watched charlie's angels yesterday and I was guessing her height to be around 5'3" next to barrymore.
aerotive said on 2/Oct/06
Josh Hartnett looked a good foot taller than her in Lucky Number Slevin. 5 ft 2 seems about right, +/- half an inch.
theheightguru said on 13/Jun/06
I agree, Tia. There is a quote on one of the posts here (I can't remember which), where Drew Barrymore says she's 5'2". Since Drew is taller than Lucy, how can Lucy be 5'3"?
Tia said on 10/Jun/06
There is no way she's 'five friggin three'. In that pic of her and the olsen twins...IF we grant that the twins are 5ft- 5ft 1in. But honestly, i don't beleive they are. They're much smaller than that. I'm 5'1 and i stand taller than they do next to men/guys of similar height to those that they have posed next to.

[Editor Rob: she's now steady at 5ft 2...that seems from most of the stuff she's done to look closest...]

[Editor Rob: surprisingly I think Lange recently might be looking a cm shorter than a few years back, but yes she looks nearer 5ft 3...]

[Editor Rob: she was consistantly described 5ft 1 before she demanded she was 5ft 'friggin' 3...]

I think Lucy is telling the truth when she says she's 5 feet 3 inches.

Ashley Olsen is reportedly 5 feet 1 inche and Mary-Kate Olsen is around 5 feet. Below is a photo of the twins standing next to Lucy.

link
phillyflash said on 21/Nov/05
I remember that quote "I'm five friggin' three" a few years ago in the Enquirer or Star. I've also seen her listed at 5'0", which I tend to believe. Just look at comparisons with her and Drew Barrymore (variously listed at 5'4 and 5'2) in the Charlie's Angels movies. Throw her on the barbie, LOL!
megan said on 9/Oct/05
i think she's around 5'2" since in the picture of her and kerry washington